Torrence Boone is an American business executive, entrepreneur, and speaker. He is presently the Vice President of Global Client Partnerships at Google.[1] Boone specializes in digital marketing and advertising and is considered a prominent figure who brings to the table utmost determination, hard work, and experience, which has resulted in him becoming a successful business executive.[2][3]

Throughout his career, Boone has assumed several leadership roles for notable companies including, Bain & Company, Avenue A (now Razorfish), Digitas, and Finish Line. He is also a board member at Macy’s since 2019, a member of the Global Business Hiring Committee, and a sought after public speaker.[4][5]

Boone is the recipient of One Hundred Black Men, Corporate Award, A Better Chance, Dreambuilder Award, and ADCOLOR, Advocate Award.[6] He has also received several accolades throughout his career and has been featured in several media outlets including, TechCrunch, Think With Google, BBC News, Campaign, NBC News, and others.[7][8][9] 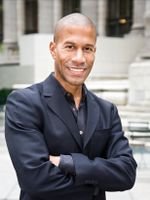 Boone commenced his career in 1995, right after graduating from Harvard Business School. He was hired as a senior manager by Bain & Company, a management consulting firm based in San Francisco. Boon worked for this firm for over four years.[11]

In 2001, Boone joined Digitas, a marketing and advertising agency in Boston, Massachusetts. He assumed the role of a president and worked for over seven years, contributing his expertise on multiple projects. After his exit from Digitas, Boone served as Global CEO of a full-service, integrated agency startup built by WPP from 2008-2010. In 2010, Boone was elected as a board director for Finish Line, a premium clothing and accessories company. He left the position in 2018.[12]

Boone was appointed as the Vice President of Google in 2010.[13] As an integral member of the company, Boone is responsible for a portfolio of world-renowned advertisers spanning tech, health/beauty, and CPG. His job includes identifying and communicating a range of possibilities within Google’s product catalog, helping Brands innovate their marketing campaigns en route to steady business growth. He is also a member of the Global Business Hiring Committee. During his first six months as Google’s Global Agency Head, he closed three multi-billion dollar global media and technology deals, the largest such achievement in the company’s history.

In December 2019, Boone joined the Macy’s Board of Directors, bringing essential consumer knowledge to the board’s marketing strategies. Boone is also a distinguished alumnus of A Better Chance, an initiative aimed at “identifying, recruiting and developing leaders among young people of color throughout the United States.” He also serves as President of the Board at Citizen Schools New York, a national education reform organization.[14]

As a sought-after public speaker, Boone has contributed his expertise to several talks and interviews on advertising, leadership, technological advancements, and consumer insights.

Outside of his professional endeavors, Torrence Boone enjoys a variety of hobbies including, yoga, snowboarding, fiction writing, literature, rock climbing, and kickboxing. He is also an avid fan of the performing arts.