Noor Haq is an Indian business magnate, investor, real estate developer and the chairman of Sanali Group, one of the largest real estate conglomerate corporations in India. He started Sanali Group with the construction of residential and commercial real estate spaces and now it is one of the bigger names in retail, shopping malls, and mixed-use commercial properties also. Noor Haq oversaw the diversification of the Sanali Group into the energy, information technology, advertising, and mining industry, which it operates through its subsidiaries.[1][2]

He is responsible for the growth of the Sanali Group and as well as the launch of a number of major enterprises. Noor Haq has overseen the development of Sanali Info Park, Sanali Mall, Sanali Gulmohar Park, Sanalii Iconic Tower, Sanali Pristine, Sanali Sea Mist and others.[3]

Noor Haq was born in Hyderabad India to Mohammedul Haq and Sitwat Jehan. He is the eldest of two children. His paternal family was Sheik Abdul Haq Muhaddis Dehlvi and Rani Sahiba Rasoolpur's family from the maternal side. His grandmother Qaisari Begum, was a renowned writer. He lost his father at an early age and his mother took a teaching job and brought him up. Haq completed his schooling from St Georges Grammer School in 1976. He joined Osmania University for Bachelors's in Science and later completed Master of Management from Delhi in 1981 and also completed a fellowship next year. He is currently pursuing a doctorate in Business Management.[4]

Noor Haq displayed an interest in business at a young age. After completing his education in 1982, he started mango and vegetable export to the Middle East market under the guidance of his mother. He continued it for four years and started the real estate business in 1986. Noor Haq received early success and earned name and money in the initial two years. In 1988, he started making Layouts and Sub-division and sold plots till 1992 and in 1992 started a construction business. He constructed Sanali Heavens first Luxury apartments in Hyderabad and Sanali Gulmohar Park first gated villa project in Hyderabad.[5] 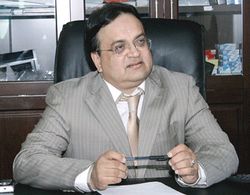 He is a member of The Nizam Club, Chiraan Fort Club and The Secunderabad Club.[8]

Noor Haq runs a charity school, The Little Roses High school for underprivileged children, it was founded by his mother SItwat Haq. Every year, 400 children from slums are provided free education, books, uniforms, Midday Meal and other things, irrespective of religion and castes. [10]

He also runs orphanages, old aged homes and a Center for women who are taught stitching & sewing to be self-sufficient. monthly pensions are distributed to the handicapped, blind, & destitute on 5th of every month at his Residence.[11]

Noor Haq has been recognized and has been conferred by the government and several notable organizations and chambers of commerce. He has received below awards

He knows English, Urdu, Hindi, and Telugu.[14] He is dedicated toward Yoga, plays Golf and does horse riding in his free time.