Jolly Amatya (born 26 February 1992) is a Nepali youth activist and social entrepreneur, based in the United States.[2] Amatya is best known for being the youngest woman and the first Nepali to be appointed as the Chairperson of the Youth Assembly at the United Nations. She is currently the Administrator of UNMGCY (United Nations Major Group for Children and Youth), a constituency of over 6000 youth entities in over 170 countries consulting with over a billion youth.[3]

Amatya is highly recognized for her impactful activism and advocacy that is focused primarily on youth engagement, women empowerment, and gender equality. She is also a notable public speaker and is often seen at several high-profile events and conferences.[4]

Amatya was born on 26 February 1992, in Lalitpur to Krishna Amatya and Jagadish Amatya. She is the eldest daughter of the couple and has two younger siblings, Kanchan Amatya and Jenish Amatya.[6] She spent her childhood in Kathmandu, Nepal, where she pursued her high school education at St. Mary’s School.

Amatya moved to the United States in 2009, when she received a scholarship to pursue higher education. She attended Coe College, Iowa, where she applied for an undergraduate degree in Economics and Finance. Amatya also studied Auditing and International Business at Harvard Summer School. 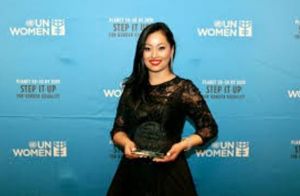 Amatya, throughout her career, assumed several leadership roles and was involved with world-class organizations like the WFUNA, the World Bank, Action Aid, and Habitat for Humanity. She even represented Nepal at the White House AAPI Youth Forum in 2015.

In 2016, Amatya started working for the UN Youth Assembly and played an integral role as the Youth Chairperson.[7] Her speech as the Chair at the UN General Assembly went viral and was highly acclaimed by the international media agencies.[8]

She also served as a board member and as a finance committee executive at the US National Committee for UN Women (USNC).[9] Amatya was also an Ambassador to Heal a Woman to Heal a Nation, Inc., which is a US-based grassroots organization that promotes wellness for women and families through education.[10]

As of May 2019, Amatya serves as the Administrator in the Secretariat of The United Nations Major Group for Children and Youth.[11] Amatya is a well renowned public speaker and is often seen at several high-profile events and conferences where she speaks about leading world issues like women empowerment, gender equality, youth engagement, and others.

Amatya currently lives in Manhattan, New York. Amatya is the sister of Kanchan Amatya who was named in Forbes magazine’s 30 under 30 Asia list.[14]