Amanda Rose O’Connor (born February 18, 1999), known professionally as Aro Rose, is an American singer-songwriter, and actress. Aro Rose is 5’ 9”. Born in Manhattan, New York, Aro Rose developed a passion for playing the piano and writing music at an early age. She became more focused on writing music after graduating from Ocean City High School (New Jersey) in 2017. Her music tends to draw inspiration from a variety of outlets: personal life experiences, original poetry, and her favorite films just to name a few.[1] With a full album on the way in early 2022, Aro’s music is available on Spotify, as well as a variety of streaming platforms.

The only daughter of Diana and William O’Connor, Aro Rose (born Amanda Rose O’Connor) was born in Manhattan, New York on February 18, 1999. Her mother, Diana O’Connor passed away on September 11th, 2001.[2] Diana worked in the World Trade Center as a managing director at Sandler O’Neill Investment Banking Company. William O’Connor continues to work as a school teacher at I.S. 010 Horace Greeley. Growing up in Manhattan and later moving to Westchester County, she attended many different schools throughout her life. Her mother, Diana, bought her a grand Young Chang piano for her first birthday. After years of early self-exploration, she was formally trained at the Larchmont Music Academy at the age of eleven and later went on to teach herself as a teenager.

Due to the traumatic events in her early life, Aro struggles with PTSD and anxiety. These diagnoses, made early on in her life through therapy, greatly impacted her ability to both focus and succeed academically. However, these shortcomings failed to hinder her appreciation and passion for the arts. In an interview with XS10 magazine, she further explains these issues.[3]

Aro states the following, “Growing up[3] I was mostly a loner, I never really had friends, so I found comfort in making music. Music has always been an outlet for me, it was a beautiful escape… I always felt like I was alone and nobody else felt the way I felt, even though I knew that wasn’t the case. Music connects people and I think it’s important to be as raw and authentic as you can when writing. A lot of people are silently suffering, and my goal is to have people never feel like they’re suffering alone”.[4]

After bouncing around throughout middle school, she moved to Ocean City, New Jersey where she attended Ocean City High School. Upon graduation in the spring of 2017, she went on to study method acting, film production, screenwriting amongst other pertinent subjects at the Lee Strasberg Theatre and Film Institute. Her time at Lee Strasberg was somewhat short-lived, as she transferred to Iona College in 2019 where she switched her interests to Philosophy and Psychology. After leaving Iona College in 2020, Aro began the path to pursue her music career. Aro wrote her first album titled “Damaged”[5] while attending college, which is set to release in 2022. 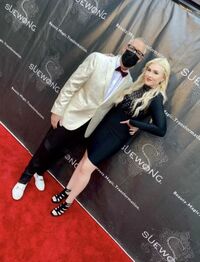 Aro started recording her music in 2017 at Executive 15 studio in Cherry Hill, New Jersey. Soon after, she signed to Parliament Records in Los Angeles, California. She later ended the contract in 2019 and became an independent artist.

Aro Rose first performed at a 9-11 benefit concert[6] at the Rumi Event Space in Manhattan, New York. Some of the major featured highlights of the 9/11 show were SohoJohnny’s duet with Kim Sledge, and a heartwarming tribute to his mom who died from covid last year showcasing Aro singing a song from “Frozen 2”.

Shortly thereafter, a tell-all was published in “Get Out” magazine.[1] Here, Aro goes into detail about her career path and her intentions moving forward. Aro also first appeared on a top podcast, “The Jimmy Star Show with Ron Russell” in 2021.

She released her first single, “Damaged,” on August 29th, 2021 and then later went onto releasing her second single, “Tarrant, ” on October 17th, 2021. A music video for the former premiered during Wonderama’s Halloween[7] parade in 2021.

“Damaged,” as a full-length LP,[3] will be released in early 2022. Multiple singles and lyric videos will follow.

A handful of different musicians, artists, and actors factor into the unique musical stylings of Aro Rose. The retro-futuristic sounds of Lana Del Rey permeate her songs, while the vocal mannerisms of Adele are easily recognizable throughout her entire catalogue.[1] Similar to lyricists like Adele and Eminem, Aro uses her own personal experiences to craft a story and connect with her audience.

I’ve loved Adele and Lana Del Rey for so long. They’ve been incredible influences in my life. Whenever I was going through a difficult time I would listen to their music. Their music really connected with my soul and for that they’ve inspired me to create my own.[1]

In the realm of film, Aro notes that both Johnny Depp[3] and Tim Burton hold a great amount of influence. Her song “Tarrant”[9] was written after watching the second Alice in Wonderland[10] film, “Alice Through the Looking Glass”. Furthermore, the career of Johnny Depp, along with his prominence in the music scene in recent years, drove Aro towards acting school and the pursuit of a multi-faceted career.

Aro Rose’s songwriting process begins with the piano, and lyrics are added along the way. Aro’s producer Gabriel Maciocia[6] and engineer Robert Federici have helped her create a sound that fits her best. Using a combination of synthes and guitars, her music is riddled with hints of dark pop[11] and layered with moody melancholy tones.

Aro Rose is roughly a contralto with a range spanning from E3 – B5. Her voice finds its sweet spot as she ascends the register, particularly from F3 – A4. Aro’s voice consists of an emotive and soulful tone.

American singer-songwriter Aro Rose released her first single “Damaged” on August 29th, 2021. The song “Damaged”[1] is about never giving up and finding acceptance in being damaged. Aro went on to perform the single at a 9/11 celebrity concert[6] in Manhattan, New York. Damaged consists of many different instruments[11] and Aro herself plays piano on the recording.

Aro Rose’s second single, “Tarrant” was released on October 17th, 2021. The song was inspired by the movie, “Alice in Wonderland”. “Tarrant” consists of a chilling wind chime-esque[11] synth. The lyrics in the song captivate strong emotion.[11]

Aro’s second video, “Tarrant” was also shot at the Flanders Hotel in Ocean City, New Jersey. The video features[7] Aro as Alice from the Alice in Wonderland movie. There other two main characters from the film, the White Rabbit and Mad Hatter[11] are also featured as well. Aro recreated the tea party scene from the film and incorporated it into her lyric video. The song features an electric guitar solo[13] at the bridge, giving the song a rock tone.