Sangeeta Boochra is an Indian business magnate and jewellery designer known for her traditional and tribal silver jewellery designs of necklaces, two tone jewellery, earrings and jhumkas.[1] She serves as the Managing Director and Designer at Silver Centrre, founded in 1897.[2] She produces more than 10,000 styles in a year. Boochra has sold designer merchandise using the label Sangeeta Boochra and has designed jewellery for Bollywood films, television, and high profile personalities.[3] She has been seen regularly at the fashion week or jewellery shows.[4][5]

As of 2020, Boochra has a chain 45 stores across the world.[6] Boochra has been reported to have been inspired by Indian traditional designs, south indian temples, villages and the rich heritage of India and Indian culture. She has won several awards, including Best Jewellery Designer, Jewellery design of the year and Best innovative design of the year.

Sangeeta Boochra is born on 27th November and raised in a small village Sujangarh, Rajasthan. She completed her schooling from Gandhi Balika Vidyalaya, Sujangarh and thereafter joined the Handique Girls College, Guwahati to complete a degree in Economics in 1984. After completing her graduation, she married Sudeep Boochra, son of Seth Lalit Kumar Boochra who founded jewellery division of Silver Centrre and inspired Sangeeta Boochra to start designing jewellery. He was the son of powerful Seth Kistoor Chand Boochra who was awarded as the Silver King of India.[7] 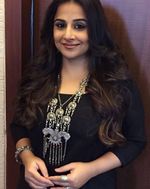 In 1985 she got married to Sudeep Boochra who was already running a Gemstone Export house, IndoGem. In 1994, her Father In law persuaded her to start designing jewellery and to join his business Silver Centrre, she always wanted to be a clothing designer but due to his persual she started designing jewellery. She travelled extensively in the interiors of India met the master craftsmen of India, worked on to introduce the indian jewellery globally by promoting Indian Jewellery. By this time, it has already been established in the Indian market. In 2010 her son Abhineet Boochra joined her and expanded the business from 10 stores to 45 in 2019. She launched her own label, Sangeeta Boochra under Silver Centrre focused on traditional, tribal jewellery with a touch of modern to the indian jewellery. She worked with her father in law to offer work to the artisans at their locations. After Vidya Balan, Madhuri Dixit, Deepika Padukone, Alia Bhatt, Royal Families of the World started wearing her jewellery[8][9] and then she sponsored various fashion weeks and travelled with the artisans and craftsmen to participate in the major fashion shows in the world, which helped in recognizing the brand globally.[10][11][12][13] 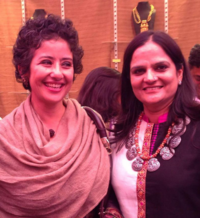 Sangeeta started with a single store in Jaipur, which still remains its flagship store and she now owns over 45 stores in the world with a team of 2000 artisans. Her work can be frequently seen in the Bollywood parties, weddings and events.[17][18][19]

She has flagship store locations in Jaipur, New Delhi, Mumbai, Pune, Ahmedabad, Bengaluru and Hyderabad.[20] Limited pieces are also carried by other retailers in various parts of India, as well as select international retailers in the United States, Italy, United Kingdom and Dubai.[4] 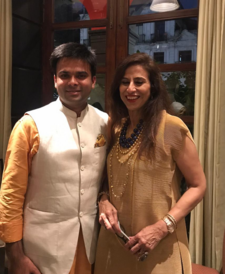 Shobha de with Abhineet Boochra inside the Mumbai store

Sangeeta Boochra has been recognized on several occasions for her silver jewelry design work.[7]

Sangeeta is married to Sudeep Boochra, a Jeweller in 1985.[21] Sudeep Boochra is the son and grandson of Seth Lalit Kumar Boochra and Seth Kistoor Chand Boochra who was awarded as the silver king of India.[22] The couple have two sons and the family reside in Jaipur, Rajasthan.