Lieke has over two decade’s experience as a corporate businessman and has worked with several renowned firms such as McKinsey & Company, Bank Mandiri, Sugar Group companies, webMethods, Smartfren Telecom, and others. Lieke, during his career, has also served as National Treasurer of the Hotel and Restaurant Association (PHRI), as the President of APINDO North Sulawesi (All Employers’ Association), and was also a chairperson of multiple Entrepreneurs Organization.

Nico was born in North Sulawesi, Indonesia in 1975. He received his Bachelor’s degree from The Wharton School of Business (University of Pennsylvania) and his Master’s Degree from Oxford University.

Nico (also interchangeably called Nico) started his career in McKinsey & Company. Subsequently, Nicho focused on company restructuring, spending most time turning around companies that were having commercial and social problems. His first notable work was with Bank Mandiri, were he did post merger management. Bank Mandiri was merged from four state banks into the largest bank in Indonesia. Nicho was a leader in restructuring Mandiri’s workforce of 18,000 employees Perhaps another notable work was turning around of Sugar Group companies. Sugar Group is the largest integrated sugar plantation in the world, producing over 20% of Indonesian-produced sugar. Sugar Group is widely known as the producer of Gulaku. Nico was a Director of webMethods, a technology company specializing in connecting ERP with other software. Working out of its Virginia office in early 2000, Nico was a pioneer in webservices, allowing access to application services via cloud. Nico’s final professional career before turning full-entrepreneur was as Commercial Chief Operation Officer of PT Smartfren Telecom Tbk, a mobile-phone-provider.

A Social and Community Leader 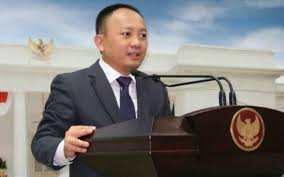 How and why Nico started his social role in Kuala Lumpur was still a mystery. Nico’s formal position was as Visiting Fellow, replacing Marie Pangestu who later became 3-term Minister of Indonesia. Nico’s practical position was to assist the ascend of Abdullah Achmad Badawi to become Prime Minister of Malaysia. Nicho later chose to keep his Indonesian passport rather than to join Badawi in Putrajaya. Nicho currently serves as Staf Ahli Senior (Senior Advisor) to Komisi Kepolisian Nasional (KOMPOLNAS). Established by the President of Indonesia and reporting directly to the President of Indonesia, KOMPOLNAS has three duties: to propose the next Chief of Police of Indonesia, to establish policy of Indonesia’s police, and to monitor operations and ethics of Indonesia’s police. Nico also currently serves as Staf Ahli Senior (Senior Advisor) to Indonesia’s Parliament (DPR RI). Nicho is active in help drafting and monitoring the implementation of recent Omnibus Law, Undang Undang Cipta Kerja. Nico has served as National Treasurer of the Hotel and Restaurant Association (PHRI)[1][2], APINDO North Sulawesi (All Employers’ Association)[3], and Various Chairs of Entrepreneurs Organization

Nico is married with two kids, Nico now resides in both Jakarta and Manado.